The Bible has been enormously prominent in Western culture – a significant source of literary, ideological, artistic, educational, and (of course) religious inspiration. Yet despite the role the Bible has played in the formation of Western culture in the past, it’s influence in the 21st Century seems to be flagging. This may be due, in part, to Christians departing from the public square. For a range of reasons, Christians are retreating to their sanctuaries and privatising their faith.

A privatised faith. In her first book, Distortion, Chelsen Vicari speaks about the emergence of “couch-potato” and “cafeteria-style” Christians. Couch-potato Christians adapt to the culture by staying silent on tough issues or downplaying biblical truth. Cafeteria-style Christians pick and choose the Scriptures that seem to jive with the culture while minimizing or ignoring Scriptures they deem offensive or confrontational.

Why is this happening? How did we get to the place where only the “nice” Scriptures are acceptable? And why the dichotomy between private and public faith? Maybe it’s because we have a deep desire to be liked. Being labelled homophobic, intolerant, legalistic, fundamentalist, or bigoted is something most of us try to avoid at all costs. So some take the course of least resistance – aiming to fit in with society by distancing themselves from the Bible and/or divorcing themselves from the public witness of the church.

But private faith isn’t orthodox faith. Being a Christian, biblically speaking, involves being light in the darkness (cf. Matthew 5:16, John 3:19-21) and proclaiming the whole truth (cf. Acts 20:27), and nothing but the truth, even when it’s an offense (cf. 1 Peter 2:8).

Bible engagement in the public square. As Liberals push for the acceptance of same sex marriages or promote doctor assisted euthanasia as an act of compassion, do the Scriptures still have a voice? As a rising generation of accommodating Christians proliferate a feel-good doctrine and tout tolerance over truth, do we still have something to say? Unequivocally and most definitely, yes! The Bible stands firm (cf. 1 Peter 1:25).

So “let us not become weary in doing good, for at the proper time we will reap a harvest if we do not give up” Galatians 6:9 (NIV).

Here’s the good news: In addition to couch-potato and cafeteria-style Christians, Chelsen Vicari identifies a third group whom she calls “convictional Christians”. They’re the ones who refuse to be silent in the face of anti-Christian sentiment. They’re not ashamed of the Gospel. They speak up. They declare and defend firmly held beliefs with grace and humility – even against determined attempts to marginalise them from the public square.

I simply argue that the Scriptures be raised again

in the halls of government,

and every pulpit in every church across the land.

I am recovering the claim that God’s Word

was not meant to be hidden in a sanctuary

But be proclaimed in the town hall,

at the crossroads of public opinion

where cynics laugh and scoffers sneer …

And in every place where people sweat and curse.

Because the Scriptures should intersect with life

And that is what the Word ought to do,

and what Christians must be about.

J.I. Packer, the British-born Canadian theologian, is considered one of the most influential Evangelicals in North America. His most popular book, Knowing God, has been read by more than a million people and was listed 5th by Christianity Today on their list of “The Top Fifty Books That Have Shaped Evangelicals.” Here are ten Bible engagement statements from Knowing God:

God has spoken to man, and the Bible is His Word, given to us to make us wise unto salvation.

We must seek, in studying God, to be led by God. It was for this purpose that revelation was given, and it is to this use that we must put it.

Knowing God involves, first, listening to God’s Word and receiving it as the Holy Spirit interprets it, in application to oneself.

Do we apply the authority of the Bible, and live by the Bible, whatever men may say against it, recognising that God’s Word cannot but be true, and that what God has said He certainly means, and will stand to? If not, we dishonour the Holy Spirit, who gave us the Bible.

The word which God addresses directly to us is an instrument, not only of government, but also of fellowship. 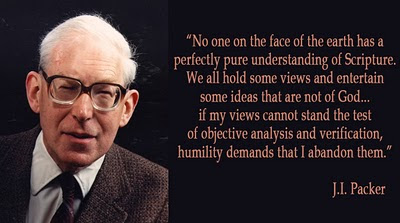 God sends His word to us in the character of both information and invitation. It comes to woo us as well as to instruct us; it not merely puts us in the picture of what God has done and is doing, but also calls us into personal communion with the loving Lord Himself.

The wise man reads the Bible as a book of life … as the book of the church … and as God’s personal letter to each of his spiritual children.