To be radicalized is to become more drastic in one’s beliefs. It’s a term that’s commonly used today – usually with negative connotations. In the context of terrorism, a person is radicalized when they sever adherence to the values of society at large and commit themselves fully to the ideology of a terrorist organization like ISIS, Hamas or Al-Qaeda.

Extreme change from an accepted form and absolute commitment to a new form is what Christian faith should be about. Unfortunately this isn’t usually true of most modern-day Christians. Rather than giving our total allegiance to Jesus Christ, we try to keep one foot in the world. For many Christians, the greater value is tolerance or accomodation, certainly not radicalization. Words like subversive, offensive, dangerous or radical are generally not in the average Christian’s vocabulary.

There’s a disturbing disconnect between today’s Christianity and the faith of the Christians mentioned in the Bible. Acceptance and broadmindedness characterizes contemporary Christianity whereas first-century Christians were an offense to society because their allegiance to Christ undermined or threatened the existing views, habits, affairs, conditions, institutions and systems of the Roman world.

Now linking radicalization with Jesus may be a transgression for some or puzzling for others, but, like it was in the first-century, it should be the reality for every Christian today. That’s because Jesus doesn’t call us to a partial dedication or limited commitment. It’s all or nothing. He wants our full and exclusive allegiance. In common with Paul’s advice to Timothy, we’re to flee from the things of the world and fight to take hold of the faith and life we have in Christ (cf. 1 Timothy 6:11-16).

Which brings us to radicalized Bible engagement. 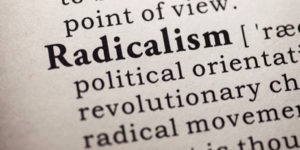 To embrace the Word, which is to embrace the One who is the Word, should be to radically receive and respond to the Word. It’s being all into Him and all out of the world. Bible engagement should be nothing short of giving our total allegiance to the kingdom message and mission of Christ. It should never be a little bit of this or a little bit of that. Radicalized Bible engagement is putting to death every word of darkness and fully immersing ourselves in the Word that brings light. It’s separating ourselves from the lies and half truths that have held us captive. It’s giving our undivided devotion to Christ and choosing to live in resurrection power. It’s appropriating His grace and denying ourselves in order to fully love Him. And it’s being a willing conduit through which His love flows to those in need.

Radicalized Bible engagement is unlike the regular way Christians usually connect with the Bible. It’s also more than a new methodology or approach to reading/hearing the Word. For radicalized Bible engagement is an uprising. It’s saying no to legalistic, guilt fueled, shame based, fear driven religion. It’s connecting with the Word as something more than knowledge to be gleaned or morals to be emulated. It’s letting the Word read us, and as it does, it’s humbling ourselves and crying out for mercy.

Radicalized Bible engagement isn’t for the faint of heart. It’s about being all in. There can be no half measures. It’s encountering the Word in ways that enable us to fully worship, work and witness in order to bring all honour and glory to Him.

When Bible engagement isn’t radicalized we need to change. The ways in which we’ve read, reflected, remembered and responded to the Bible in the past cannot continue with us into the future. Why? Because what got us where we are won’t get us to where we need to be.

Now that’s not to say that embracing Christ through radicalized Bible engagement will be plain sailing. Far from it! Radicalized Bible engagement places us at odds with the world’s values and choices. God’s Word is, and always has been, an offense to those who are not Christians. Whether we like it or not, when we choose to live out our love for Christ through total obedience to His Word, there will be negative reactions, opposition or persecution.

And herein lies the tension. Some Christians don’t like the fact that God’s Word is an offense (cf. 1 Corinthians 1:23-25, 1 Peter 2:8) to those who don’t know or love Jesus. So they try to mitigate the offense by watering down, creatively excusing, or falsely interpreting the Bible’s message. When this happens, the weakening of the Church and the death of faith follows. For every attempt to take the offense out of God’s Word always results in the loss of the saving and transforming power of the Gospel.

So let’s be all in! Let’s forsake lukewarm Bible reading/hearing. Let’s break with our loyalties to the systems, entanglements and distractions of the world. Let’s renounce the fears and failures that control and restrict us. And let’s do this by praying for a Jesus revival in our personal lives and communities of faith. Then, as we pray, let’s subversively reclaim Bible engagement as something more than it’s been by asking God for a form of Bible engagement that results in extreme devotion and absolute allegiance to Jesus Christ as Lord of all and Lord for all!