I know there’s unbelievable power in God’s Word. Yet every now and again I find myself in a local church where it’s tragically obvious that most of the people in the pews are dead to the Word. It’s remarkable. People can be completely unmoved by the Word even though they read it, sing it, and listen to someone preach from it every week.

The Bible says, “Though seeing, they do not see; though hearing, they do not hear or understand” Matthew 13:13. But how is this possible? It’s possible because of the incredible influence of religion!

Institutional traditional systems (religion) can and do bring Bible engagement to a grinding halt. In fact religion is the scourge of Bible engagement. Even though God’s Word stands firm forever (Isaiah 40:8), produces fruit, achieves God’s purpose (Isaiah 55:10-11), and is as sharp as a surgeon’s scalpel (Hebrews 4:12), it’s negated by rules and rituals.

Note Jesus’ stinging comment during a dispute with the Pharisees and teachers of the law: “Thus you nullify the word of God for the sake of your tradition” Matthew 15:6. And again: “You have a fine way of setting aside the commands of God in order to observe your own traditions!” Mark 7:9.

Yes, the power of God’s Word is canceled by religion. For when religion, rather than God’s Word, frames peoples thinking, they’re “ever hearing but never understanding … ever seeing but never perceiving” Matthew 13:14.

In the words of Frank Viola, “In so many ways, religious tradition has shaped our minds. It’s captured our hearts. It’s framed our vocabulary. So much so that whenever we open our Bibles, we automatically read our current church practices back into the text.”

Herein lies the problem with religion. It violates the DNA of the Word by twisting and grinding the scriptures to accommodate its practices. It’s a Procrustean bed. When the scriptures are “too small” or “too big” for religion, they’re stretched or chopped off to fit its mold.

Scottish theologian Thomas F. Torrance pointedly says, “It is high time we asked again whether the Word of God really does have free course among us and whether it is not after all bound and fettered by the traditions of men. The tragedy, apparently, is that the very structures of our churches represent the fossilization of traditions that have grown up by practice and procedure, and they have become so hardened in self-justification that even the Word of God can hardly crack them open.”

So if religion is the scourge of Bible engagement, what are the practical implications?

Firstly, we should understand that the hearts of traditionalists are calloused – they can’t hear and can’t see (Matthew 13:15). While it’s true that God’s Word can form and transform lives, religious people can’t hear this good news because they’re deaf.

Secondly, notice how Jesus didn’t revise, restructure or renew the institutional traditional systems of Judaism. Nor did the apostles. That’s because religion is mainly barren ground. 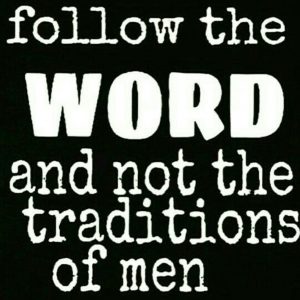 Thirdly, because religion corrupts the understanding and expression of God’s Word, connections with the Bible are compromised or contaminated in traditional systems.

These observations, in my view, leads to two conclusions:

Trying to do Bible engagement with religious people is like scattering seed on a road (Matthew 13:19).

The sentence above was where I originally finished the draft article. But my colleague Amy Csoke read it and said, “I feel like it isn’t complete. I just feel like you present an issue in many of our churches and the solution is ‘give up they won’t change’, or maybe I’m misreading it.”

Amy isn’t misreading it. In the light of the Scriptures cited in this article and the testimony of centuries of religious traditionalism, there seems to be little to no hope for churches mired in religion. Having departed from biblical foundations, in large part they’re beyond restoration.

I’m not alone in my pessimism. In the words of British evangelist T. Austin Sparks, “What is called ‘Christianity’ – and what has come to be called ‘the church’ has become a tradition, an institution, and a system quite as fixed, rooted, and established as ever Judaism was, and it will be no less costly to change it fundamentally than was the case with Judaism. Superficial adjustments may be made – and are being made – but a very heavy price is attached to the change which is necessary to really solve the great problem. It may very well be, as in the time of the Lord, that the essential light will not be given to very many because God knows that they would never pay the price. It may only be a ‘remnant’ – as of old – who will be led into God’s answer because they will meet the demands at all costs.”

Of course, I may be completely wrong in my evaluation, and it may be possible for traditional religious systems and denominations to be renewed. I would love to see full renewal in the institutional church. But for that to happen, traditionalists will have to abandon their cause, read the Bible without a religious mindset, let go of what they want the Bible to say, dismantle the extra-biblical clergy system, stop believing in their structures, suffer the loss of their reputation, forsake their methods, and remodel the church so that it becomes, as God intended, a living, breathing, mutually participatory, Jesus championing organism.